The Rhodesian Ridgeback is intelligent, loyal and devoted, protective of home and family; training and socialization are musts. Exercise needs are moderate and adaptable.

The Rhodesian Ridgeback is a native of South Africa. The breed beginnings date back to the early 16th century: the first European settlers in Africa found native dogs whose hair on their spines grew forward – the “ridge” for which RR’s are known.

Breeding native ridged dogs with breeds brought by the settlers—Mastiffs, Danes, Greyhounds, Bulldogs, Collies, Terriers and others—eventually produced all-around dogs who could hunt, herd and guard the home. Despite popular belief, Ridgebacks were not bred to actually kill lions; they would hold lions and other large game at bay until the hunters got there.

Ridgebacks are fast, strong, athletic, intelligent hunting dogs and natural guard dogs. They are fast learners, naturally clean and quiet in the house, and affectionate with their inner circle. Many have high prey drive.

Ridgebacks are likewise independent, often mistaken for stubbornness, and require confident, consistent, strong owners who will set boundaries and enforce them. Positive training and socialization are MUSTS for the breed. They do not do well isolated from the family or as outdoor dogs.

Ridgebacks’ intelligent, elegant, and engaging personality can make them excellent and active companions. They are versatile enough for a wide range of activities.

Females: Average 24-26 inches at the shoulder, and roughly 70 pounds.

Males: Average 25-27 inches at the shoulder, and roughly 85 pounds.

Light to Dark Red Wheaten*. The color ranges from a blonde to a dark red; the dark red is often accompanied by a dark mask on the face. These dogs may have black on their faces (masked) or be “clear faced;” they have black noses and dark brown eyes. There is a “liver nosed” version—this dog is lighter in coat color, the eyes are a lighter color (green in puppies) and their noses are brown.

*“Wheaten” is a term that means the hair of the dog’s coat is banded—light and dark alternate. This gives the dog the typical lighter shading on shoulders, hips and other areas. There are other colors that occur with rarity, such as blue, black and tan and brindle. Those colors are not acceptable in the show ring. Learn more at: http://kalaharirr.tripod.com/oddcolors.html

Although the ridge is the hallmark of the breed, Ridgebacks can be ridgeless—all this means is that the ridge is absent in a dog, so its back looks smooth, like the back of any other breed.

Ridges can also be varied; the ideal ridge is in the shape of a broadsword, with two whorls or “crowns” immediately behind the withers; it then tapers down the back to a point at the point of the hips (between the hip bones).

Ridges can be short, long, wide or narrow, and can have no crowns or multiple crowns—multiple crowns can appear anywhere along the ridge.

Only two other breeds are typically ridged: The Thai Ridgeback Dog (from Thailand) and the Phu Quoc Dog (from the island of the same name, in the Gulf of Thailand).

Good if raised with them; most Ridgebacks do not tolerate well the clumsiness of toddlers and the way they explore dogs (tail and ear pulling, sitting on them, etc.). Children need to be taught to respect Ridgebacks if living with them.

Good with other animals if raised with them. It can be a challenge with a dog with a  high prey drive.

Versatile and adaptable, fast and athletic. Sports they regularly compete in are Lure Coursing, Tracking, Barn Hunt, Nosework, Fast CATs and others. Many also compete in Obedience, Rally and Conformation. Hiking and jogging are other activities they will enjoy. They can also make excellent horse companions. Though not used as much in the US for it, they can also hunt land game. Many Ridgebacks do not like water.

The Ridgeback’s short hard coat requires little care; grooming with a currycomb (as used on a horse) and finishing with a hound glove (usually made of sisal) or a soft cloth will keep them in good shape. They do shed, though, and the hair can embed itself in furniture and clothing. Bathing as necessary is usually quick and easy. Nails are thick and hard, and should be trimmed (with strong clippers or a grinder) once a week, at least.

The Ridgeback is usually a robust dog. But there can be hereditary issues that reputable, responsible breeders test for, including:

All puppies should be checked repeatedly for Dermoid Sinus: this is a condition in which a tubular structure is open at the skin surface and extends sometimes as deep as the spinal cord. The sinus can become infected and filled with pus. Affected dogs are born with the dermoid. Many can be removed surgically; this should be arranged for by the breeder. 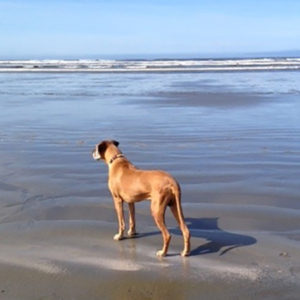 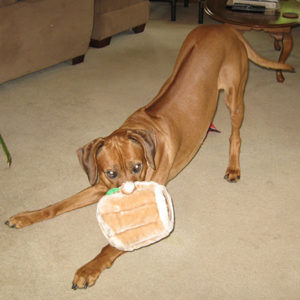 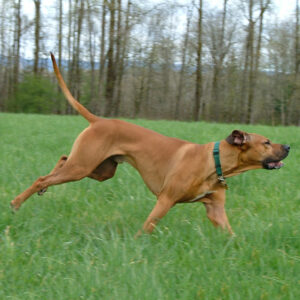 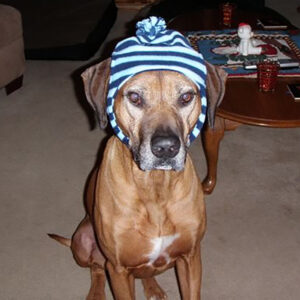 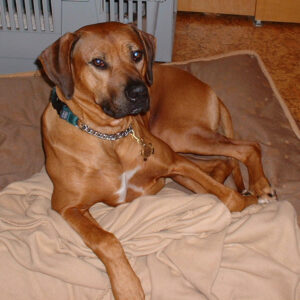