Manchester terriers are one of the most versatile and hardy breeds, and can be ideal pets in many circumstances.

The Manchester Terrier is the oldest identifiable Terrier breed, having been traced back to the late 1570s, when it was known as the Black and Tan Terrier.

By the early 1800s, the Black and Tan Terrier was cross bred to the Whippet to produce a breed that was not only a proficient rodent killer, but also a very capable game courser. The breed was renamed the Manchester Terrier as the Manchester district of England became the breed center.

Manchester Terriers were initially bred to be vermin hunters, a task they excelled at. In addition to being a companion animal, they were used to rid both homes and ships of rats and mice. Eventually a sport developed in England that involved the killing of rats. Dogs were put into pits and bets were placed as to which dog could kill the greatest number of rats in a given period of time. A five pound Toy Manchester Terrier named “Tiny” was reported to have killed 300 rats in 54 minutes and 50 seconds. This “sport” eventually fell out of favor and is no longer practiced.

Early socialization to a variety of situations and people, along with obedience training, is a must to make the Manchester Terrier a well-rounded pet. Puppy socialization and obedience classes are also a great way for a new owner to bond with their Manchester.

Only one color pattern: black with tan points.

Due to the high prey drive of this breed extreme care must be taken around other small animals.

The breed does well in obedience trials, agility trials, rally exhibitions, and go to ground events. They have even been known to achieve herding degrees!

The Manchester Terrier’s short, close single coat doesn’t need much grooming, and shedding is minor. However toenails must be trimmed weekly. 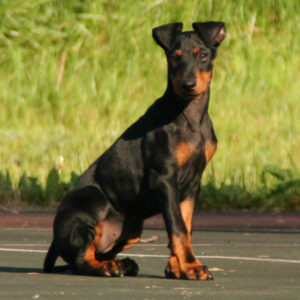 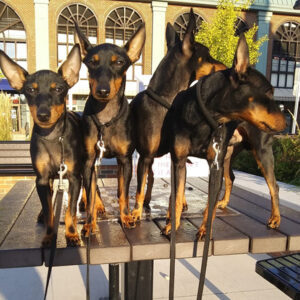 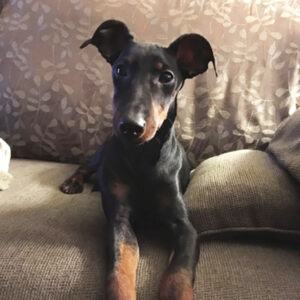